Baptism of children and adults

We are very pleased to welcome young people into the family of the church and so baptisms normally take place at the Family Service on the first Sunday of alternate months.  When we have more families to accommodate, however, we can sometimes offer baptism services after the main morning services.

So what is baptism?

There are two main aspects to baptism:

Forgiveness
We all need God’s forgiveness, and baptism speaks to us of washing or cleansing.

New life
Our forgiveness cost Jesus his life.  God offers us a new life as we turn to him.  So in baptism, we ask for God’s forgiveness and start a new life with him.

Why baptise a child?

This will involve a number of things:

This may mean some adjustments within family life, but we are all prepared to make certain sacrifices so that our children can have the best.

The elements of the service:

Sacrament
Christians describe baptism as a sacrament – this means an outward and visible sign of God’s love.  The actions that we take with the water and candles are signs of God’s own gracious initiative in bringing about new life in the heart of the one being baptised, in response to the faith expressed by the parents and Godparents on behalf of the child.

The water
Water is an important sign of life, both in a physical and spiritual way.  Just as we cannot live without water to drink, so we cannot live eternally without the cleansing and renewing love of God.  The water of baptism symbolises being washed clean by God.  The Bible links this with the imagery of dying, in the waters of baptism, to the old life and being raised to a new life, with Christ.

The sign of the cross
During the service the minister will make the sign of a cross on the forehead of your child.  The signing on the forehead is like a badge and reminds us that as Christians we must not be ashamed to profess our faith and must fight against all that is evil in this world.

The candle
At the end of the service, the newly baptised are sent out with a lighted candle, as a sign of the Church’s commitment to mission: `Shine as a light in the world to the glory of God the Father. 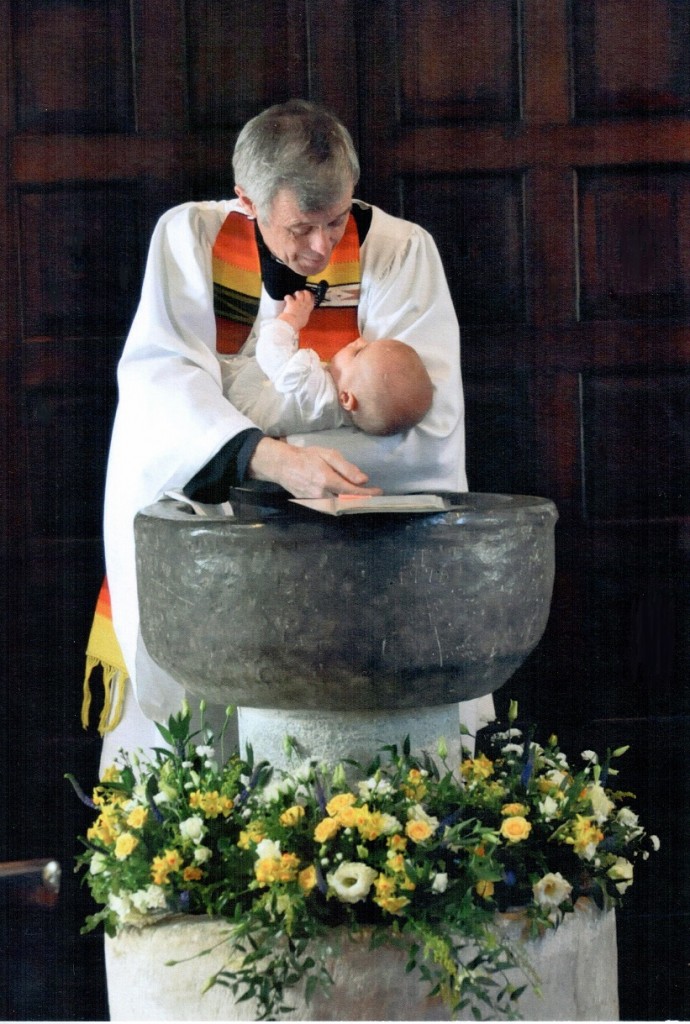 What do we do next?

If you are considering having your child baptised then please download the form below and send it to Mary Lee (Holy Trinity) – maryrose28@btinternet.com or David Carter (St Margaret’s) – davidjcarter@btinternet.com

See our Church of England website for more useful information

Increasing numbers of older people – from teenagers to great grandparents – are making their own decision to join the Church. For some people this comes as a sudden conversion. For others, a curiosity about God or about the person of Jesus grows into a gradual awareness of his presence and an increasing conviction that he demands some sort of personal commitment. They feel the need to express that commitment by joining a worshiping community of the Church.

Some people follow a slightly different path. They get involved with their friends or their children in the social activities of their local church without having much interest in what the Church is really for. They enjoy the friendship of Christian people and get interested in the Church for its own sake. Gradually, they, too, want to belong.

If you find yourself in this position, what should you do?

Talk to your Christian friends or to Christians you know and trust. Go to church – with a friend if possible – and choose the main Sunday service. At many churches, the congregation gathers for a cup of tea or coffee afterwards and newcomers are welcomed. This is a chance to meet other members of the congregation and to introduce yourself informally to the clergy.

Many people were baptised (christened) as a baby but have had little contact with the Church since. Baptism is, nevertheless, permanent and cannot be cancelled or repeated. So, if you were baptised as a baby, in whatever church that took place, you are still baptised and you cannot be baptised again.

Some people do not know whether they have been baptised or not. It is important to find out from parents or older relatives and to discover where it took place, because you may need to obtain a baptismal certificate.

If you are a Christian from another denomination and feel drawn towards joining the Church of England, the way this is done will depend partly on your present denomination. If you have been baptised, and confirmed by a bishop, in another denomination then, after a period of preparation, you will be received into the Church of England, probably by a bishop during a confirmation service. If you have not been confirmed, or even baptised, then you will be prepared for this along with other candidates.

If you have not been baptised, that is the place to start.

In the early days of the Church, new Christians were often baptised at Easter. After a course of instruction in the faith, they publicly entered into a new life. They repented of their sins, were assured of God’s forgiveness and were baptised, often in a river. This was a symbol that they had died to their old life and, born again, been given a share in the Holy Spirit who came on Jesus at his baptism and, after his resurrection, was given to his disciples.

Generally, in the early Christian centuries, those who joined the Church were not only baptised with water: the bishop also laid his hands on them in blessing, a rite which later developed into what we know as confirmation.  Admission to the Church was completed by their receiving Holy Communion for the first time.

If you begin to feel you want to be received into the Church, discuss it with your local minister. They will probably suggest that you be prepared for baptism and confirmation at the same time and that you join a confirmation class.

Every parish runs an informal course for its confirmation candidates, usually one for adults and one for young people. Sometimes, adult candidates are prepared individually.

You will normally be confirmed at the same service in which you are baptised. In most churches a baptism takes place at the font, where water will be poured over your head. Some churches have facilities for baptising people by total immersion.

You will be asked to make the promises of baptism, repenting of your sins and turning to Christ. You must declare before God that you accept the Christian faith. The priest who baptises you will call you by your name and then use the words based on Holy Scripture: ‘I baptise you in the name of the Father and of the Son and of the Holy Spirit.’